I’ve been asked to go into this in brief in the Camino talk next week so I think it’s an ideal time to post about it. The majority of people have found out about Santiago and it’s many Ways from the amazing Martin Sheen and Emilio Estevez’s film, ‘The Way’. Others may have read about it in travel magazines or books, most notably, The Pilgrimage by Paulo Coelho. However, I found out about it purely by accident.

I have the great organisation, Aware, to thank for in this case. Because if it was not for them, I would not have this addiction and urge to go back to Spain each year. In the middle of 2010, I was handed a hastily put-together leaflet telling me about their plans to “Walk the Camino”. At the time, Aware was my chosen charity and I have fund raised a number of times for them. Anyway, I read through the leaflet but put it to one side once I had finished, not giving it a second thought. It just wasn’t for me but I promised that I would advertise it where I could. A number of weeks later, I saw the leaflet and thought..”well, let’s see what’s involved first?”, and wrote an email to the organisers. Within a few days, I received a information pack giving me a little bit of information about the Camino, the plan, what to bring, costs and what was required to fundraise!
At that stage, my two feet had taken their first steps, so to speak. I had started walking longer distances and had started to fund raise for this great charity. I will never forget the Table Quiz night in a packed pub in Dublin when I raised the vast majority of funds. However, while things were starting to fit into place, little did I know what to expect when I arrived there. I had done very little in preparation for the actual Camino, spending more time on fundraising.
June 3rd 2011 – All 8 of us boarded our flight for Santiago de Compostela. It was my 1st time in Spain with 0% Spanish. We were carrying suitcases, save for one guy with a backpack. On arriving in Santiago, we met our guide, and zipped across to Sarria, some 110km westwards. He got to know us all and gave us details of our next day’s walk. We were of all ages, from all over Ireland, with various abilities. I was pretty sure I could walk 20km the next day, but for 5 or 6 days in a row..time would tell. We checked into our nice hotel on arriving in Sarria and had some dinner. The one thing I remember is desperately wanting to stick with one of my fellow walkers as I had no spanish. I felt totally lost otherwise.

The following day, we left our hotel with nothing but a day-pack, a packed lunch and some water. Within a few kms we were greeted by a whole host of people walking in the same direction..whoa!..”is it normally this crazy?” I thought to myself. I also noticed folks carrying large rucksacks. “Is this normal?”, I thought again. I’m not sure I would be able to do that, and not at the pace they were going at. I met people from the world over, quite a lot were willing to stop and chat and tell you about their first day. I learnt my first few words of Spanish also..”de donde eres?”..”where are you from? You either get a look of bemusement, which means the person in question is not Spanish, or a conversation will begin! That day I was introduced to the Camino, and I was delighted to arrive in Portmarin some 22km later. The following days were tough, I won’t lie. I suffered. But, I enjoyed my times with my walking buddies. I loved the Spanish way of life and culture and when I arrived in Santiago, I celebrated, took it all in and left. I didn’t think I would come back. For me, I had “Walked the Camino”. 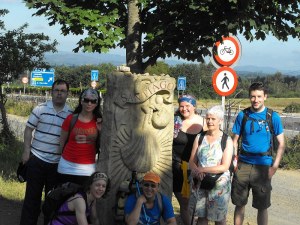 It wasn’t until September of 2011, when I started looking over photographs, did I reconsider going back to Spain and walk another section. This time I wanted to walk a different Camino, I wanted to walk my Camino. I emailed Garry, the guide from the previous trip, and he sent me on great information on packing lists, albergues and great information on how to get to Leon, my starting point. At this time, The Way had just been released and there was a great increase in interest. I set off in May 2012 and I guess the rest is history. I connected with the spirit of the Camino this time, no matter how much pain I feel. It’s a great chance to strip away the layers of materials that you have in everyday life, so all you’re left with is happiness. I just wish I could walk a full Camino, but hey! ho!..that’s for another post!! 🙂

So how did you hear about the Camino de Santiago?

2 thoughts on “So how did you hear about The Camino de Santiago?”

Drowning in the busyness of life, and how I stay afloat, and find peace and stillness amidst the chaos

With my new novel Lost in the Fog to-be published September 21, 2020, last fall I embarked on a four month trip to France, Spain, Portugal, and the Caribbean. The main reason for the journey was to hike the Camino de Santiago, a 550 mile pilgrimage. With this blog, I am excerpting from the journal I kept. As David Lynch once said "getting lost is beautiful".

Discover your next page turner

Words are a powerful and liberating gift to give and get.

A daily selection of the best content published on WordPress, collected for you by humans who love to read.

A Camino for All - Camino de Santiago

My times on the Camino de Santiago

Turning Dreams into Realties, and Miles into Memories

Have dreams, will travel.

This blog reflects on human concerns and offers spiritual practices to deal with them.

Walks through Spain, Italy and other places