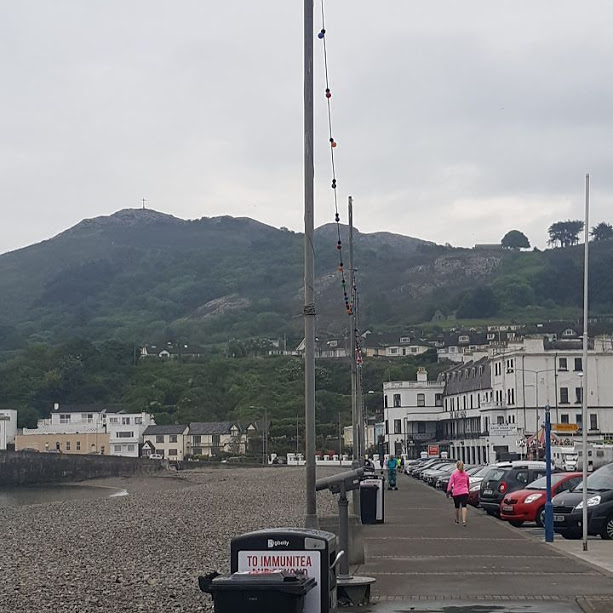 Hike #2
Bray town, around and over Bray head and back to the town.

Another weekend and now just 100 days (eek!) before I fly back to Spain and into Madrid. Time flies, doesn’t it? And speaking of time flying, this day 4 years ago I had completed my third day on my third stint on the Camino Frances. My 2013 Camino was easily my favourite and one I will cherish for a long time. I met so many good people and I hope, one day, to see some of them again.

This weekend was shaping up to be something special. During the week, temperatures were in the 20s and the sun was out most days. I had 2 walks planned and was eagerly looking forward to them. Today (Saturday) was in Bray with Camino Society Ireland, and Sunday with the Camino prep / training meet-up group. There were rumours of rain coming up from the South to hit Dublin today but I quietly had my fingers crossed. The last thing I wanted was to be mid-hike in the middle of a downpour. So I packed my rain gear in the hope that there would be just a few showers and that would be the end of that. I left the house in the midst of light rain but nothing that would bother me.

After an hour trip by train, myself and my brother arrived at Bray and was welcomed by quite a few fellow walkers. There were more at the first outing in Howth a month previous but I would put that down to the weather. I brought my Osprey 33 litre backpack with Helly Hansen rain jacket and Berghaus rain trousers. I had my pacerpoles with me this time as we were advised to bring poles with us. They proved to be a great help.

So 10 am came and went and we started to move out. The walk involved using the cliff walk from Bray to Greystones but rather than continuing to Greystones, we would climb up and over Bray Head and loop back to Bray. Looking from Bray, it seemed daunting, but we were assured that the climb was gradual and not as steep as it looked. Onwards we went along the promenade which was bustling with joggers, walkers and a solitary accordionist. The clouds were dark but I wasn’t dressed for rain at this stage.

10 minutes in, as we were walking along the cliff walk, we felt the first drop. One drop became two until a steady shower started. “This is down for the day”..I said to myself. I pulled on the rain jacket and continued in the hope that it was a solitary shower and it would clear sharpish. At the very least, it would be a good time to test the rain gear! A half an hour and it hadn’t relented. The zip-offs were soaked so I thought that now would be a good time to don the rain trousers. The backpack was a lost cause at this stage and soaked through. I should have brought a cover! After a little while, we stopped for a bit so I could put on the rain trousers. They were a massive help! I would recommend them to anyone interested. Most there had ponchos but I prefer rain jacket and trousers.

The climb up the hill was tough in places but nothing too challenging. It was pretty funny seeing a sign warning us of the presence of a bull and totally disregarding it. Yes, we are that crazy!! There were a few awkward obstacles to negotiate but all in all the climb is anything you would see while walking from Rabanal del Camino to Foncebadon. At times, we were walking through flowing streams but the rain started to subside while we were making the descent back to Bray. It was pretty misty also, and it was a shame that we didn’t see the one thing that we came to see…Bray Head cross. Visibility was very poor being so high. The descent was gradual but the rain made walking difficult and it was very easy to slip. After another hour, we made it back to base safely and in one piece.

Despite the conditions, it is a beautiful walk and I would love to give it another go in better weather. During the week, the Camino Society left me a message on Instagram (after I expressed concerns about the forecast)..”It will be like a new adventure”..and it most certainly was. It gave me a great chance to test my rain gear and find any faults..which there were many. I have a few months to find a more effective rain jacket as my Helly Hansen just didn’t cut it. It was also great meeting society members again and talking about future plans. Bernard and Jim can’t be praised highly enough. I can’t wait for the next outing.

Unfortunately, with the poor weather conditions, I felt it wise to cancel the Camino prep / training meet up in Howth tomorrow. I have been on the Howth cliff path while it is raining and it can be difficult to negotiate some sections.

Hi. I'm David and welcome to the Clearskies Camino blog. I live in Dublin, Ireland and have walked a number of pilgrimages including the Camino Francés and Camino Portugués. My love for writing began on returning from my 2nd Camino de Santiago in June 2012. I had been writing a journal while on the Camino Francés and it made sense to write my thoughts online. As the Camino became more of my life, so did the urge to give something back.